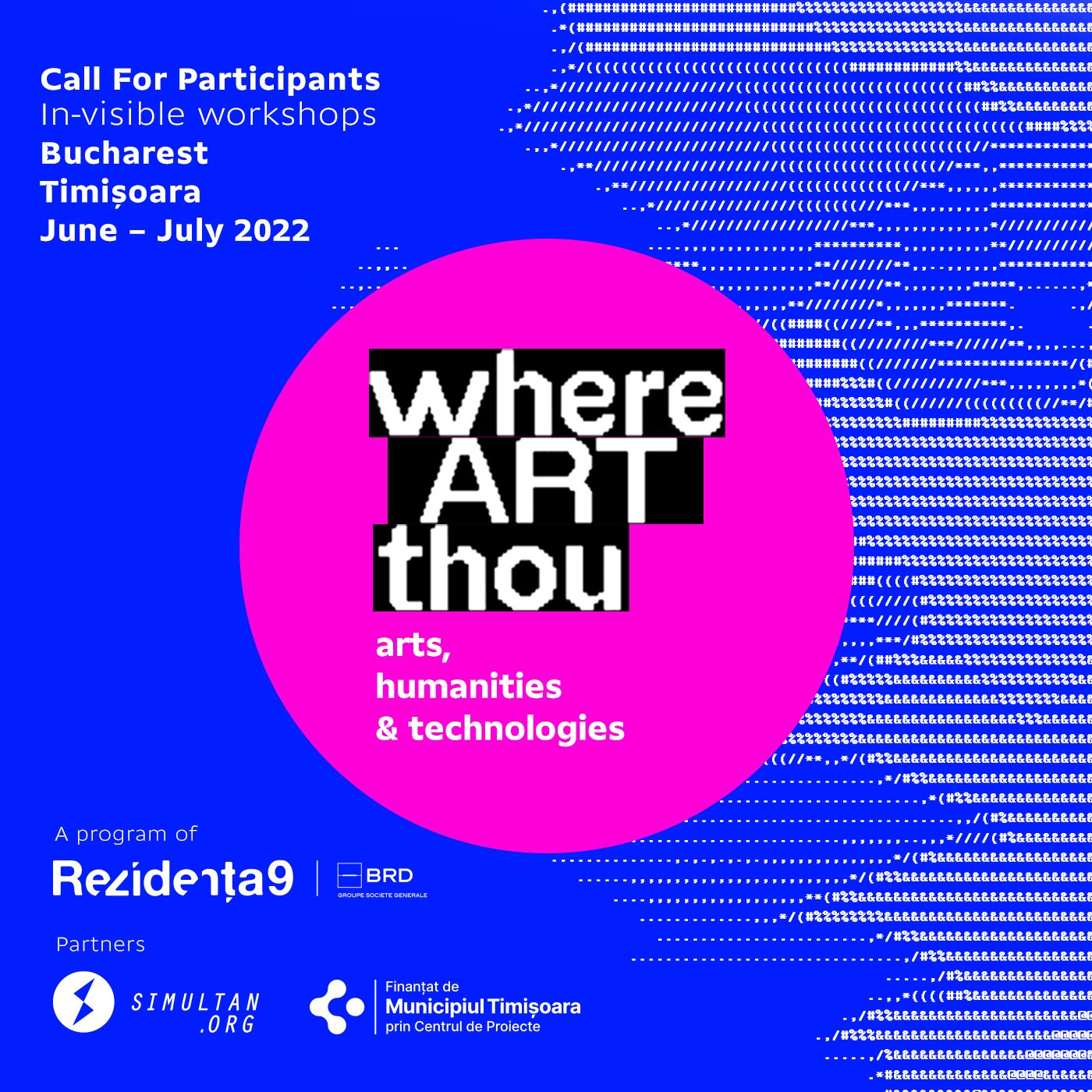 Where ART Thou? 2022 – call for participants

Where ART Thou? (WhAT?) is a project initiated by Rezidența BRD Scena9 in partnership with Simultan festival. WhAT? is an annual program designed as an event around arts, social sciences and digital humanism in which technology is a method, a tool for production and communication, and a source of inspiration. In 2022, WhAT brings the discussions on the existing connections between art, new technologies and society back to the public’s attention.

This year’s concept relies on the status of individual and collective invisibility in an attempt to protect our identity in the digital interaction. Among the topics that will be addressed are: context hacking, sound and language as forms of surveillance, the theoretical stages of surveillance and its variations depending on the context, the persistence of our digital fingerprint in the cloud, Metaverse or on social networks.

The program proposes two dimensions:
A series of 6 intensive training and mentoring workshops given by Romanian and international theorists and practitioners, on the constant concerns about the impact of technology on society.
An exhibition that will result from the selection of 3 to 5 of the best ideas resulting from participating in training workshops.

The workshops will take place in Bucharest & Timișoara.

JUNE 25 – 27 | Radu Uszkai (RO) – Ethics of Surveillance and the digital/algorithmic panopticon
The central theme of the workshop is to cut out and analyze the ethical stakes and risks of new digital and algorithmic surveillance technologies.

The central theme of the workshop is to cut out and analyze the ethical stakes and risks of new digital and algorithmic surveillance technologies. Starting with the model of the panopticon advanced by the philosopher Jeremy Bentham in the 18th century, we will explore the extent to which these new technologies have created the institutional preconditions for the emergence of some forms of total surveillance in the relationship between citizens – state and consumers, companies.
The fundamental ethical stake of our exploration will be to better understand the purpose and role of protecting personal data and the right to privacy.

During this three day workshop, we will explore the complexity of the artificial and natural radio waves. By using a cheap hacked tv receiver USB dongle – a rtl-sdr – and some free softwares, anyone can nowadays transform a laptop in a very powerful radio receiver. We’ll discuss the basic concepts around radio waves and spectrum about the physical, legal, and artistic aspects. After a setup and configuration phase on the laptops of the participants, we will be able to receive the numerous radio signals around us. A practical introduction to the possibilities of the receiver and the manipulation of antennas will allow the participants to autonomously search and decode signals. WiFi, FM radio, Bluetooth, microwaves, thunder, satellites, planes, TV… nearly every radio signal can be acquired by our computers and transformed into sound. This technical formation will be accompanied by some artistic reference and conceptual critics on the use of radio waves in the art to help the participants imagine a radio artwork.

* the rtl-sdr will be provided to the participants
* participants must bring their own laptops.

JUNE 10-12 | Arnaud Eeckhout și Mauro Vitturini (BE) – Language, sound and control
The workshop proposes an analysis of the artistic, philosophical and social substrates of sound as a form of control, archiving and tracking tool, but also as a weapon.

JUNE 17-19 | Johannes Grenzfurthner (AT) – Context Hacking
The term context hacking is a specific style of political action that is based on a careful analysis of the power paradox, turning it into a starting point for subversive interventions.

The workshops are designed for artists, thinkers, creatives and developers from Romania with a minimum of practical experience or theoretical activity in the use and application of new technologies in culture, regardless of field (visual arts, music, cinematography, performing arts, film, animation, etc.).

Participants whose works have been selected for production will receive an artist fee and a production budget, depending on the needs of the work.

Registration is open until June 27, by filling out the form here.

More details on the program, mentors & who can apply here.

Where ART Thou is funded by the Municipality of Timisoara, through Center of Projects and Fundația9.
Production partner in Timișoara Plan Zero