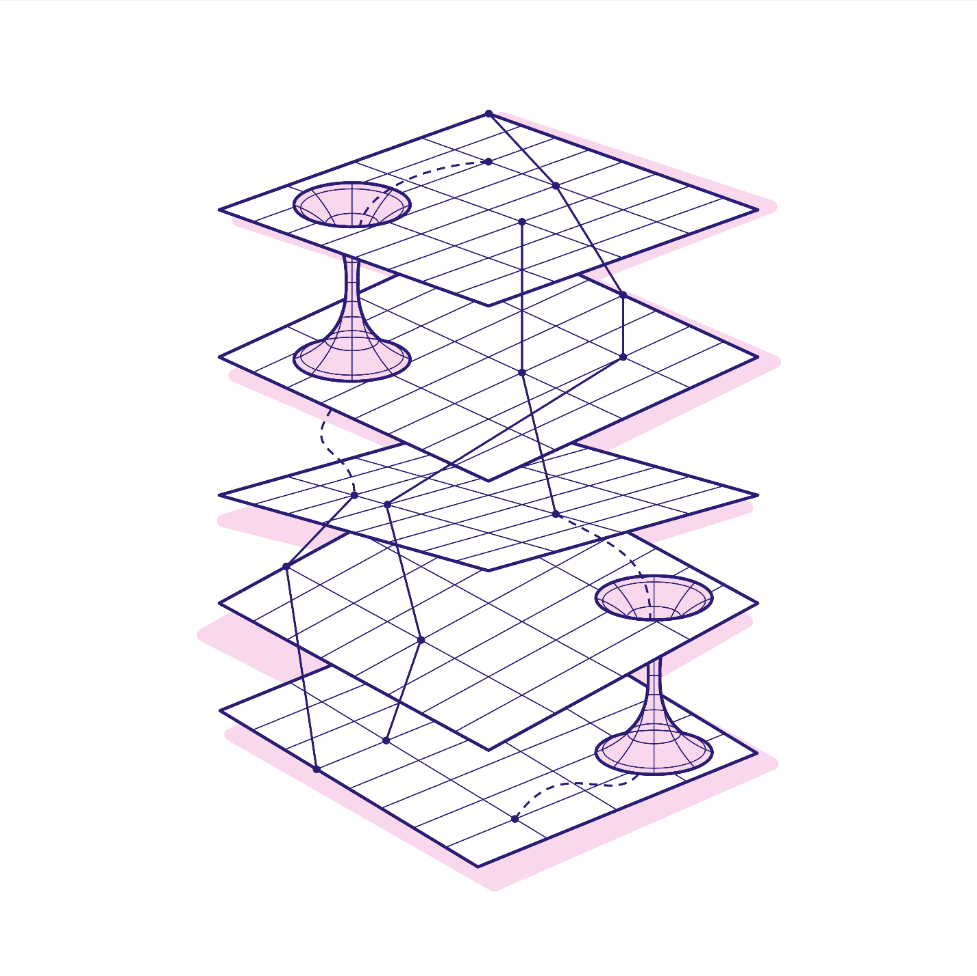 As the dreamscapes of modernity we inhabit collapse all around us, infrastructural dreams and dreaming infrastructures manifest as both grandiose plans and ludicrous, out-of-touch egotistic escapisms (think bunkers for the rich or escape plans from Earth to Mars) ruled by longtermist fantasies.

These attempts to leave behind and ignore mounting contradictions and rising volatility feel more and more dreamlike and appear self-delusional or just wishful thinking.

Dreaming Infrastructures allows for the possibility that there might not be a mismatch but a strange collaborationism between dreams, nightmares, and our increasing inability to tackle the polycrisis at hand. While this opens the possibility of infrastructural alliances that are still unformed, ‘undreamed of’, not really here yet, and perhaps existing in someone or something’s lucid dream. This also opens the frightening perspective of having to confront living inside somebody else’s dream that turns out to be quite real.

Timisoara has been at the forefront of early industrialization in Romania, right since the start of the Industrial Revolution with its extensive networks of railways, manufacturing, and worker associations and the Socialist era has seen the growth of Chemical plants and early computing such as MECIPT (The Electronic Computing Machine of the Timisoara Polytechnic Institute) from the 1st and 2nd generation computers.

Very quickly after 1989 its industrial vestiges have been both cannibalized, torn down, abandoned, and transformed into start-up incubators, business parks to dream up a future that is being monopolized and speculated upon with increasing frenzy. It has been both a time of ‘Waiting Spaces’ (the name of a series of mappings of former industrial spaces in Timisoara) and even more so of ‘Waiting Infrastructures’.

Like many other places in the East, Timisoara has witnessed increasing financialization and deregulation as well as a defunding of large-scale infrastructural projects and in this sense lies outside the scope of vast projects say – such as the Road & Belt Initiative and China Dream, that themselves seem to teeter under the threat of geopolitical tremors. We would like to tease out these common dreams and fears and act as a collective “Dreamcatcher” for what pulls through the web of majestic dreams or living nightmares.

On this occasion, during the weekend of 25-26-27 November, Paradigm Shifts invites you to participate in a diverse series of presentations and lectures by artists, researchers, and curators as well as a panel discussion.

What is disaster architecture? How should we humans build to not only survive but also live in disastrous times? Should we fortify ourselves behind technological castle walls in the urban jungle? Hide in caves deep in the forest or high on a mountaintop? Escape into space and settle on other planets?
Those questions are the focal point of Jacob Lillemose’s novel Architecture Zero.
Architecture Zero is a disaster novel about a world where humans must protect themselves against each other. A world plagued by pandemics and social unrest. A world in which disasters are the new normal. The novel unfolds in a twilight zone between research and fiction and mixes documentary material and popular learning cultural references in a form that transverses genres and realities. It is equal parts architectural history, eco-criticism, film analysis, horror, social diagnosis and autofiction.

Jacob Lillemose (b. 1974) is a curator at the Medical Museion in Copenhagen and curator of the Danish pavilion at the 2022 Venice Biennial. From 2014 to 2017, he was the director of the exhibition space X AND BEYOND as part of the interdisciplinary research project Changing Disasters at the University of Copenhagen. Architecture Zero is his debut novel.

Arne Hendriks is on a lifelong undisciplined artistic research to inspire and develop a personal and societal desire for less. Recently Arne’s research ventured into human current diet and more specifically into the difficulties surrounding the protein transition, eating less animal protein and more plant-based protein, where meat-eating and milk-drinking has become a proxy for the reluctance to change. During an 18 month residency at Wageningen University & Research Hendriks initiated several projects with the intention to disrupt contemporary human/protein relationships and the mistrust Hendriks feels towards his own protein-body. Ongoing projects of Arne Hendriks include The Incredible Shrinking Man – an investigation into the possibility of downsizing the human species to just 50 centimeters tall – and FATBERG, the creation of an autonomous island of fat, in collaboration with Mike Thompson

Catastrophism is a dream of an adult generation that feels that the world is heading towards various ecological (global warming), epidemic (pandemics) and political (fascism) apocalypses. To wake up from catastrophes, different subjects were invoked to rebuild the world: eco-furious children (Greta Thunberg), orphans of the Second World War (Somewhere in Europe, 1948), resistant indigenous people (Zapatistas in political theory) or North American indigenous people (in the socialist version of westerns). This presentation aims to discuss, starting from Walter Benjamin’s texts, the relationship between catastrophe, children, indigenous people and the phantasm of social recomposition. Why are children the first to bring us into the symbolic space after the catastrophe? Are the natives a dream of the end of the catastrophe, or on the contrary of the awakening after the apocalypse? How can the present feel like a present of awakening and memory? The image is a still from the film Somewhere in Europe (1948), about a community of children after the war in Hungary, who want to create the world from scratch.

Based on his developing notion of Un·Earthing–the transformations of humans and human cultures by leaving planet Earth – Ralo Mayer’s short film quite physically explores the relation and entanglement of our bodies with extraterrestrial material. As a dream-like storytelling–perhaps¬ a space miner’s dream?– the film invokes a spectrum of various meanings of the Greek term pharmakon by making out with meteorites and hands-on pharmaceutical processes.

Ralo Mayer is an artist, filmmaker and researcher based in Vienna. His works delineate “ecologies of contemporary history” by interweaving pasts, futures and today’s Science Fiction into cross-media ensembles of storytelling. In his artistic research PhD “Space Un·Settlements”, Mayer investigated the interrelations of experiments & designs for future life in space and rather earthly realities here, on our planet, as well as the form of the essay in various media.

Changing the disposition of knowing through Pre approaches, Pre strategies.
Bypassing lyrics and agreed cog transmissions.
The freshness triggered by decomposition.
Anthropo-decentring and cosmic indifference.
Composers and decomposers, mining for overtones.
Pre portals – two-way gates through which a subject can arrive both in to the deepest past or in the furthest future.

Ion Dumitrescu started with classical ballet, then he went abruptly into contemporary dance,
arriving to the postspectacle practice in 2008. A practice and a set of performance strategies
that he co-initiated with Florin Flueraș.

He co-founded and contributes to Bezna publications, most recent featured in Black Hyper-
Box (a speculative toolbox designed by Alina Popa and Florin Flueraș).

Within the postspectacle practice he developed The Romanian Presidential Candidacy,
helping contriving a set of para-electoral events between 2010 and 2014 that took place both
in Romania and on international turf.
Co-assembling contexts and making performances that attempt to destabilise and shuffle
artistic identity, collapse time duration and to drastically investigate the structure of the
spectacle inside and outside the black-box – white cube conspiracy.
Involved in the developing of various conceptual instruments, tools for transgression and
navigation. Publishing “Pre”, editura frACTalia 2019

The Museum of Amateur Cinema is a private museum, unique in Romania, which aims to research and bring back to the public’s attention the movement of amateur cinema in Romania. The main directions in which the museum is oriented are the collection of equipment used by filmmakers (film cameras, projection devices, screens, film cutting and gluing presses, films on film), the collection of pieces related to the film industry and culture (posters of films, pictures from films, pictures with actors, film programs) and facilitating public access to the exhibitions made.

The museum is hosted by the UBB Reșita University Center, being located in the former projection booth of the “23 August” cinema.

The game draws on a series of interviews conducted by Alternator during the summer of 2022. The interviewees are persons directly involved in the shipment business: seafarers, truck dispatches, warehouse workers, training and recruitment agents, as well as field researchers. You can listen to short parts of these interviews while playing the game as audio info points. For the extended version with many more insights, and analysis on maritime logistics please check this podcast.

How will you prepare your body to live on other planets, for example on Mars? In this exercise, the artist and self-proclaimed meteorite licker Ralo Mayer will guide the participants towards a so-called Un·Earthing practice. It is a journey with a focal point in pharmacology and rather physical contact with pieces of the cosmos.

Ralo Mayer is an artist, filmmaker and researcher based in Vienna. His works delineate “ecologies of contemporary history” by interweaving pasts, futures and today’s Science Fiction into cross-media ensembles of storytelling. In his artistic research PhD “Space Un·Settlements”, Mayer investigated the interrelations of experiments & designs for future life in space and rather earthly realities here, on our planet, as well as the form of the essay in various media.

Initiated by the Simultan Association, ‘Progres. Paradigm Changes’ proposes an artistic reflection on the history and industrial heritage of Timișoara, on how the memory of some places and communities has transformed or even disappeared. Fragments of collective and personal history, narratives that question this process of transformation will be reshaped from a socio-political and technological perspective.

A project developed by the Simultan Association, part of the Timișoara 2023 program – Addictive Lights. Financed by the Municipality of Timișoara through the Center of Projects.