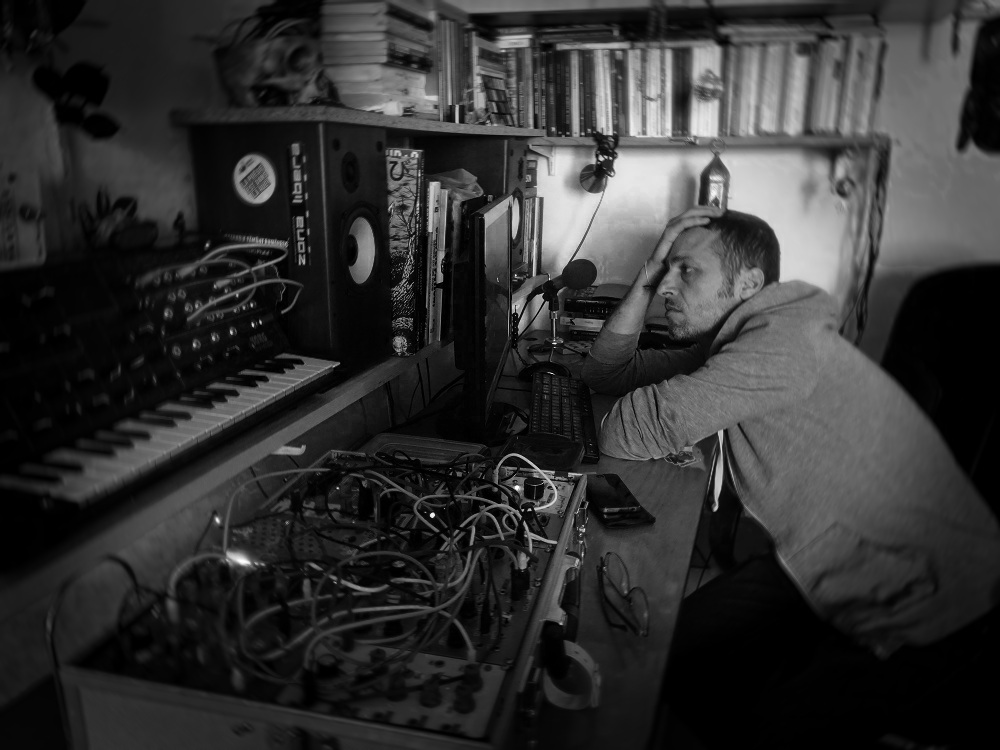 Our guest for the 6th edition of the SCHIZOPHONIA sessions is Mitoș Micleușanu, bringing forward his outstanding sound art project “Angstwurm”, which is based on a hybrid setup: modular synthesis + granular processing of “emissions” of a sound object, as well as of vocal elements.

Mitoș Micleușanu may very well be the most chameleonic interdisciplinary artist you and I had yet to see. Armed with an iron will to reject anything that resembles a form of definitive branding regarding him or his work, Mitoș managed to smash all those demotivational clichés that tell us that we can’t do everything in life and forcefully fit us in a proverbial box for the sake of categorization, labeling, and other social-constructivist nonsense.

His debut into the realm of electronic music was made between 1998-2000 with the project “Diaphragm”, and from 2002-2008 with “Pneumaton”, a more complex experimental sound art project. His current work explores the intersection of modular and granular sound synthesis as a zone of interference between ambient, post-industrial and electroacoustic genres, and it’s signed under the names Micleusanu M. or CPU99. Most of his musical explorations are based on a mixture of field recordings and various altered sounds generated with the help of different preparations.

“One of my main concerns is probing a sound-induced “substratum”, a generator of states and perceptions. I start by viewing the production of sound like a modeling paste. On one hand, the sound facilitates a sensory “induction” and the connection to a fluctuating, archaic substratum, with which we have an increasingly shallow depth contact.

These readily inert dynamics that transform us into a kind of paranoid-schizoid “bio-mechanisms” help us raise questions of freedom and ethics, because the chaotic substratum we come from, paradoxically, seems increasingly disturbing or threatening. Paranoid reactions to this substratum reveal a rupture, and this leads to a progressive cyberization of perceptions. In other words, this may also explain the increasingly deficient or dysfunctional relations we tend to have with the natural environment, and the consumerist pragmatism that increasingly marginalizes the magical, mystical or archetypal sphere.”

Schizophonia is a term coined by R. Murray Schafer to describe the splitting of an original sound and its electroacoustic reproduction.
This concept comes from the invention of electroacoustic equipment for the transmission of sound, which meant that any sound could be recorded and sent anywhere around the world.
Originally, that was not possible, as every sound was original and could only be heard once. Schizophonia is the separation of this native sound and the recording of it.

The event is part of the Emergency Entrance project, a serial of events dedicated to experimental art, through relational, technological and research-based practices. Framework design by the Simultan Association and Lapsus Artspace.

The program does not necessarily represent the position of the Administration of the National Cultural Fund. AFCN is not responsible for the content of the program or how the results of the project can be used. These are entirely the responsibility of the beneficiary of the financing.